Pat Peoples- The main characer in the book, also the narrator, is 32 and has just been released from the hospital after five years when he thinks he has only been in there for a year. He is obsessed with getting back together with his wife and goes to extremes. He runs three times a day for two hours with a trash bag aorund him so he can loose more weight. He has many fits where something triggers him to freak out and scream.

Tiffany- Is a sex addict that lives in the back yard of her parents house. She is widowed at the age of 27 when her husband dies in a car crash. She views Pat as somone she can relate too and end up falling in love with.  She exerts all of her feelings into dance in the chance to come in first at every dance competition. She recruits Pat as her partner and ends up lying to him about having contact with Nikki.

Danny- Pats best friend from the mental hospital who is the only one who knows his secrets. Danny makes an appearance at the begining and end of the novel around the pivtol parts in the book acting as Pats shoulder to lean on.

Dolores- She is Pat's mom and ends up taking him from the mental hospital. All she wants is for her family to be together. Her husband never haves dinner with them and withdraws from coversations. She also often gets in fights with her husband that lead to door slamming and sleeping on the coach.

Pat Sr.- He is Pat's dad. He is obsessed with the Greenbay Eagles and often has the course of the game decide his emotions for the rest of the week. He withdraws from conversations and doesn't want involvement in his son's life.

Dr. Cliff- He is Pat's therapist who also has a love for the Greenbay Eagles. He appears alot in the boook at Eagle games acting as Pat's best friend and someone he can talk too.
Plot Summary:

Against medical advice and without the knowledge of her husband Pat Solatano Sr., caring Dolores Solatano discharges her adult son, Pat Solatano Jr., from a Maryland mental health institution after his minimum eight month court ordered stint. The condition of the release includes Pat Jr. moving back in with his parents in their Philadelphia home. Although Pat Jr.'s institutionalization was due to him beating up the lover of his wife Nikki, he was diagnosed with bipolar disorder. Nikki has since left him and has received a restraining order against him. Although he is on medication, which he doesn't take because of the way it makes him feel, and has mandatory therapy sessions, Pat Jr. feels like he can manage on the outside solely by healthy living and looking for the "silver linings" in his life. His goals are to get his old job back as a substitute teacher, but more importantly reunite with Nikki. He finds there are certain instances where he doesn't cope well. For instance he can't listen to the Kenny G song that was played at his wedding and he can't accept the fact that he was in the mental health institution for 5 years, when he thinks he was in there for only a year. Though while he is trying to get better you see the other mental issues that the people he loves has. Such as his Philadelphia Eagles obsessed OCD father who has resorted to being a bookie to earn a living, his best friend Ronnie who quietly seethes over the control wielded by his wife Veronica, and Veronica's widowed sister, Tiffany Maxwell, a recovering sex addict. In their fragile mental states, Pat Jr. and Tiffany embark on a love/hate friendship based primarily on what help the other can provide in achieving their individual goals. Tiffnay and Pat first met when Pat was doing his runs every mornign Tiffany would run with him everyda without saying a word. Tiffany is obssessed with dancing and getting first place in a contest But in order to do that she tells Pat that if he trains with her everyday for 5 hours for a month and preform well in the competition, she promises to be the middle man for Pat and help him communicate through letters to his ex-wife Nikki. When in reality Nikki has a restraing order on Pat, has been remarried, does not know he is out of the hospital, and has no intentions on getting back with him. Tiffany pretends to be Nikki and writes letters to Pat trying to have him understand that she has moved on. In this process she believes that she is doing a good thing and helpin Pat find closure. Things do not go as plan and when Tiffany tells Pat the truth and then tells him she loves him he loses it and runs away. Several months pass but Pat ends up forgiving Tiffany for what she did and begins to apprecaite her effort. The book end with him deciding that he needs her in his life.

I personally saw the movie this past summer and had wanted to read the book. I am one of thos people who don't like to watch the movie before reading the book, but this was an exception. When I heard we got to pick two books to read for fun Silver Linings Playbook that first thing I thought of. I opened the book with an idea of how the book was going to develop and end. But man was I wrong. Turns out the book and movie are not similar at all. Granted they both have the same main characters who end up getting together at the end and Pat is obsessed with the player Hank Basket and getting fit,  but all the details are wrong.

In the book Pat wants a relationship with his dad, but his dad is emotioanlly uncapable of it. His dad tends to hide in his office all day, not eat with the family, and won't talk to anyone while the Eagles are playing. Though in the movie the dad is portrayed as the one who wants to make a connection with his son and Pat hides in his room. In the book Pat never talks or meets his wife. He only sees her at the very end when he is in his car watching her and her family in the snow.  In the movie Pat meets Nikki at the dance competition and they talk about what happened between them. A major strain on Pat's life in the book is the fact that his parents are always mad at each other and wanting to get divorced. This leads to several occasions where Pat has to pick a side and it ends up ruining him. In the movie his parents are portrayed as a happy couple who are there for thier son's health. I main turn of events in the book is when Pat finally sees his best friend, Danny, from the mental institution at the end of the book. Pat sees this as a silver lining that god sent hm after his fight with Tiffany. Though in the movie Danny is present all the time going to Eagles games with Pat and his brother. The last difference between the two has to do with Pat's marriage. In the book the whole point of the story is that he does not know what happened with Nikki and thier marriage and he thinks everything is okay they are just having "apart time". In the movie Pat somehow remembers everything that happended between them and often has flash backs of them together. 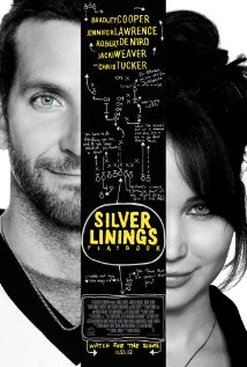 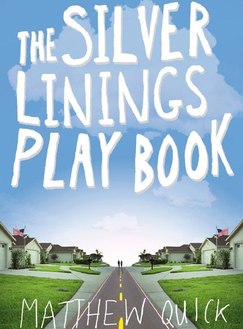 In the book we read this summer, How to Read Literature like a Professor, it talked about how almost every character goes on a quest. Though the quest is not what the character though it was going to be. This is what happened to Pat. There ae five parts to a quest. The first part is the questor. The questor in the novel is Pat. Then Pat needs a place to go and that is out of the mental hospital. Next step, as described by Thomas Foster, is a stated reason to ge out of the hospital. Pat's reason is to be able to rekindle his love with his wife Nikki. The second to last part in a quest are the challenges. Pat faces many challenges. They are getting fit, getting a new wardrobe, forming a conection with his dad, making new friends, exceptng his past, being kind, and not freaking out to the song by Kenn G. The last part of a quest and most important part is self knowledge. This is when a character realizes that the original reason for th quest is not true and they instead realize something deeper within them. At the end of Silver Linings Playbook, Pat has accpeted the fact that him and Nikki will not be able to get remarried. Once he has accepted this he sees everyone around him who has loved hm and helped him on this journey. He was not able to see that before hand and becomes very grateful. Within his self-realizaion he notices his true feelings for Tiffany and plans to live happy with her as they overcome their mental illness together.
Current Event
Silver Linings Playbook's main focus was mental illness. It was considered the first movie to accuratly describe the effects mental illnes has on the individual and the people supporting them. It demostrates it in a comedic way that has the audience laughing. but also crying as Pat searches fro answers. Mental disorders are not something someone can notice just be looking at the person and in often cases people are not diagnosed untill late adulthood. This is true for Pat and Tiffany as they come to terms with thier deppression and diagnostic of being bipolar. The most important topic discussed in the movie is the stigma. Less then 33% of people reach out for help and treatment afraid of what others might think. This is a frightening number that shows we need to lend a hand to those around us. " In our society, mental illness is ridiculed, dismissed, feared, marginalized, and ignored. It takes great courage for people to admit they need help and healing, let alone to go public with their efforts to manage an ongoing disorder. " Silver Linings Playbook does an excellent job at uncovering the stigma of mental disorders and one can only hope that it has enlightened our society to think twice befiore putting a label on someone.
For more about this current event
Powered by